You may have heard about this famous section of Amsterdam, and quite likely everything you’ve heard is true! Check it out for yourself, it’s unlike any place else.

Amsterdam’s famous Red Light District covers a large area in the oldest part of the city. It has been servicing the personal needs and desires of locals and visitors for five centuries. There is a certain charm to the area thanks to the old buildings leaning at odd angles overlooking tree-enshrouded canals, while inviting pubs, cafes and coffeeshops tempt you to linger longer. Music of every genre can be heard along the streets from a dozen or more venues late at night. Recently redone streets, revamped façades, new, classier resturants are now transforming what was once dark and dingy into one of the most attractive parts of town! Now there are more reasons then ever to visit the Red Light district, and experience this very special place.

The hoertjes (hookers) are completely legal and regulated by the government now, ensuring that they have access to medical care. There is even a sort of union for the prostitutes to help lobby the government when needed. For more info about prostitution, we recommend you pay a visit to PIC, the Prostitution Information Center, where their helpful staff can answer your questions and you can view their exhibits and purchase condoms and lubricants. They also have a new website with informational brochures and photos for sale at www.redlightdistrict-info.com 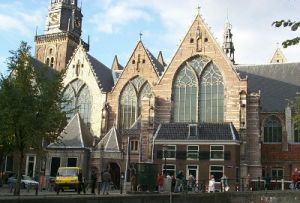 From the gothic Oudekerk, or Old Church, narrow alleyways lead through the busiest section of the Red Light District. The sacred and profane have coexisted in this section of Amsterdam for a long time. The XXX logo of Amsterdam once meant charity, resolution, and heroism, but now conjures up the image of a lewd city. Indeed one might get the wrong idea about Amsterdam and the Dutch if one visited only this area of town. Their tolerant attitudes towards prostitution, soft drugs and pornography result from an acceptance that these things are human and a reluctance to criminalize common (and profitable) vices.

The narrow alley ways of the Red Light district are busy all day long. In the peak evening hours business is so brisk you might have to wait! Remember, photography of the ladies is not permitted and you will be in trouble if you try. Along the canals are some of the big sex shows. The Casa Rosso and the Banana Bar are the most famous. Hidden away in less obvious locations are a number of brothels that cater to a more discerning clientele. Some of these brothels have been around for ages in classy canal houses easy to mistake for a residence. A few specialize in S&M and other kinky fun. And then there are escort services that can send you a suitable playmate during your stay. In Amsterdam, you can have it your way.

Amsterdam is also famous for it’s pornography. The sex shops are located not just in the red light district, but along other shopping streets. Some of the shops are huge, a few are several stories. Along with the usual assortment of videos, magazines, sex aids and toys, there is always something new and unusual to check out.

Unlike similar shops in the U.S. and elsewhere, the Dutch shops don’t usually draw the line at straight or even gay sex. 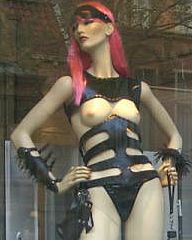 Warmoesstraat, a very busy street in the Red Light district is home to a number of gay bars and cinemas. But the Red Light district isn’t the only place for the gay scene. Other areas of town are also popular, especially Reguliersdwarstraat where Havanna Bar hosts a lively crowd. Further down on Amstelstraat is the famous iT club a popular gay disco just off the Rembrandtplein.

The Red Light District is one of the few places you can get good Chinese food, rather than Indonesian style Chinese food. You can tell these places because they have cooked Duck hanging in the window. This is Amsterdam’s Chinatown, and besides the restaurants there are other Chinese businesses including a well stocked supermarket across from the Waag, near the Nieuwemarkt.

Posted in Things to do in Amsterdam