Visit Poland with this map. Double-click to zoom in, click and drag to move it around. Change from satellite view to road map to combination maps. Plan a trip from Warsaw to Krakow by train!

From this You Tube Channel

Upbeat music video about being Polish!

From Bilbek66’s You Tube Channel 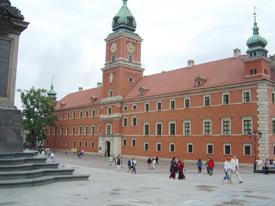 Royal Castle, Warsaw
When arriving in Old Town Warsaw, the most striking building you will see is the Royal Castle. This was the ancient residence of the Mazovian and Polish Kings, and the seat of the Sejm during the Commonwealth.
The Royal Castle was blown up by the Nazis in 1944.
According to the castle’s website, "the plan to rebuild the Castle failed to win approval from the Communist authorities for many years.The decision to reconstruct it finally was made in 1971, rewarding the attempts of the nation’s intellectual elite to recreate this symbol of Polish statehood."
The reconstruction of the Castle was funded privately, not by the government. The interior being furnished with original works of art that had been rescued before the Castle’s destruction.
They also go on to say that "the Castle is a prime monument of national history and culture. Each year hundreds of thousands of visitors enrich their knowledge of history and deepen their aesthetic appreciation within its walls. It provides the setting for cultural events and official state ceremonies, as well as visits by figures from international political life."
Visiting here will give you a glimpse of the royal splendor that existed in the past, in Poland.

END_OF_DOCUMENT_TOKEN_TO_BE_REPLACED

Begun in 1916, the National Museum in Warsaw was completely rebuilt and reorganized in 1995. The traditional prewar names of museum units were reintroduced and the Sculpture Collection was renewed. There is a new Collection of East Christian and Byzantine art.

The opening of new permanent galleries, the Gallery of Italian Painting and a reorganized Gallery of Ancient Art, occured in the year 2000. END_OF_DOCUMENT_TOKEN_TO_BE_REPLACED