Crocodiles are the world’s largest reptiles,
and that is why you see warning signs such as these
when traveling thru the Wet Tropics of Far North Queensland in Australia.
Crocs rule here. 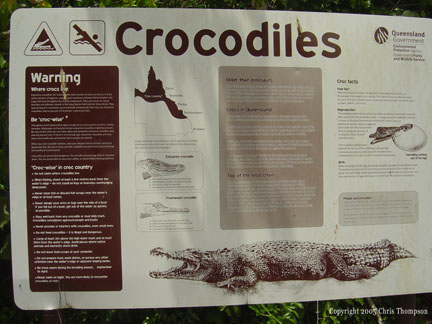 There are 23 species of crocodiles worldwide, but only two live in Australia, the estuarine (Crocodylus johnstoni) and the Freshwater (Crocodylus porosus).Freshwater crocs can only be found in Australia, and are seen in freshwater rivers, billabongs and swamps. You can track them down in Northern Queensland, the Cape York Peninsula and in the Gulf of Carpinteria regions.

Estuarine Crocodiles live mainly in the tidal sections of river outlets, fresh water lagoons, billabongs, swamps and waterways throughout Southeast Asia. You may also run into one on a beach in the Great Barrier Reef area, or in the Torres Strait. They cruise up the waterways hundreds of miles inland, so be careful and don’t think they just live in salt water… it’s the opposite. One may be lurking in that nice swimming hole some native told you about, you know – the one on the highway at bridge number so and so… 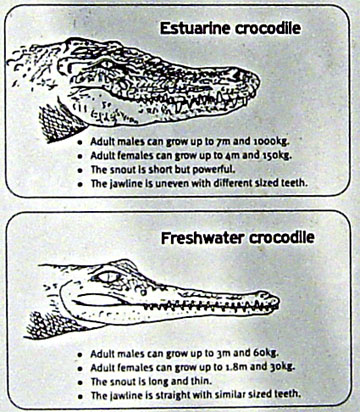 There are two types of crocs here in Australia, besides Queensland’s estuarine type, there is the Johnson, or freshwater croc found in the Kimberley area of Western Australia.

Warning signs have been erected at most spots where crocodiles exist, but as a rule of thumb treat all tidal rivers, creeks and bays in Northern Australia, in the tropics, with extreme caution. Crocodile attacks have killed or seriously injured people in Australia. Be “Crocodile Wise!” Check in with local authorities or the folks at your campground, hotel, or resort before swimming, fishing, boating or camping near tidal rivers, creeks, bays and mangrove shores.

Otherwise, leave the creatures alone in the wild, and enjoy a visit to one of the numerous croc farms or displays. They are the best places to get close-up pictures of the crocodile without being in danger.