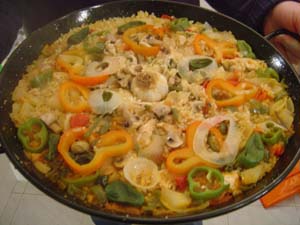 This home-made Paella is actually made with chicken and vegetables, as there are many variations of Paella.

Paella comes in many flavors, and always is made with that fat-grained rice from Valencia. Valencia is where Paella is from anyway, so with a few examples of the local Paella under my belt so to speak, I ventured forth to make Paella myself, while living on the Costa Blanca.

So here is my most recently favorite variation, Paella con Pollo y Verduras.

Directions for putting it all together:
Heat the olive oil in the paellera, the special pan. This pan will sometimes need to be placed over TWO burners for even heat distribution. (TIP: keep rotating the pan during cooking as well.)
Add the garlic and onions, the tomatoes, chicken and vegetables, holding the pepper rings aside for the top.
Sizzle gently for ten minutes until chicken is browned on all sides. Add cayenne and sweet pepper, the salt, and spread the rice evenly over everything in the pan. Stir this only until well mixed.
Heat the chicken stock until boiling, then pour evenly over the mixture. Place the pepper rings on top, and push the whole head of garlic into the center, then pour the peas over the top. Cover and simmer for 20 minutes without stirring. I use sheets of aluminum foil to hold the steam in.
The key to a fabulous Paella is the succadore, the crunchy, almost-burnt rice that forms at the bottom of the pan when cooked over high heat. When the Paella is finished cooking, one can hear a popping sound as some of the rice kernels explode. This signal is that it’s time to let it rest for a few minutes off the flame, while setting the table with some Vino Tinto, fresh bread and olive oil with an Ensalda Mixta.
Enjoy! This is some of the best Spanish cuisine.

Recipe by Martin Trip, Editor of the Hip Guides.