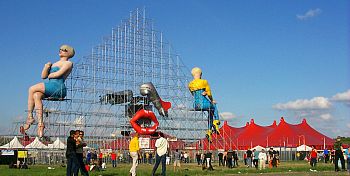 At my first trip to Dance Valley years ago I was impressed by the upbeat energy of the music and the dancers. Back then about 35,000 people attended the Sparnwoude location, and there was lots of space to walk, sit, even get away from the larger groups who tended to hang out under the tents.

The venue facilities remain the same, but the sold out event now hosts 100,000 people in the same space, with pretty much the same tents, and a few more vendors. With that many attending, it was almost impossible to find a place to sit, much less get away from the crowd. Just getting from one area to another became a huge challenge. At one point we tried to cross a bridge where there seemed to be two seas of people faced off in the middle, with no one budging. Some people were climbing the fences on each side of the bridge and walking on the outer edge to get by the impasse.

Evidently, we escaped from Dance Valley just in time because some 90,000 people were stuck for up to three hours in the pouring rain. Instead of the promised 130 buses, the management only provided 30 to shuttle everyone back to Amsterdam. 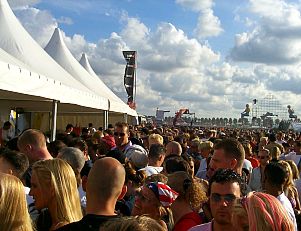 What fun it is to wait in line!

By far the biggest problem was WAY too many people. I guess they just have to pack as many bodies into the same space as they can profitably fit. What results is something any sardine will relate to, being packed into long queues for everything, especially a desperately needed drink after the 3 kilometer walk from the bus stop to the front gate.

Pushing and shoving was the rule as you tried to squeeze your way to any service counter to order something from the very sparse menus. Lots of words and elbows were flying in the resulting melees. Fortunately I didn’t see any outright fights, although it wouldn’t surprise me if there were some.

Did this detract from the dance music?
You betcha. I spent more time walking around or waiting in lines than actually listening to music or dancing. Finding out what was where, became a futile exercise, with no maps posted anywhere on the entire site. Of course, you could buy a plastic coated program to hang around your neck for 10 guilders, but why should that be necessary just to find out who’s playing where?

But how was the music?
Well, I found myself after the third tent saying “isn’t that the same music we heard in the last three tents?” and when I passed by that same tent again I asked “isn’t that the same TUNE we heard when we were here two hours ago?”. Yes, of course it is! With very minor tempo variations, the sound eminating from almost all the tents was exactly the same. The same uncreative, uninspired, “what dial should I move next?”, sound. Sometimes I guess the DJ would get distracted and the same exact sound would repeat itself for maybe a minute or longer.

I could even say it was exactly the same music I heard three years ago in Dance Valley, but that wouldn’t be correct, as back then, there was MORE variety. Or perhaps the music just sounded fresher back then. I noticed that the crowd seemed a bit older than my last visit to Dance Valley. Perhaps three years older. Same music, same scene, same people, just far more of them, and far more hassles.

If Orbital hadn’t shown up at the end to close the show, there would’ve been NO variation that I could tell in the music. That set, while breaking no new ground, at least provided a glimpse of what was once a very exciting, creative music scene.

The Day the Music Died
So what is it with Dance Valley, that attracts such a large crowd? Is it just a party you can’t miss, or has it become so overcommercialized that profits outweigh substance? What does it tell us about the masses who go to these venues to be queued up, searched, squeezed, drugged, tobacco fumed, and to maybe dance a bit? I often wondered as I looked into the faces of these “ravers” what was going on behind those extacied eyes.

The monotonous beat of the drums pounding in their heads, the piledriving metallic sound echoing off the hills, sound so industrial, so devoid of human feeling and voice, so devoid of beauty. Is this the low spark of high heeled ravers?

“I can’t hear you!”
The biggest activity besides queing up and dancing seemed to be calling on cellphones. I saw so many people standing in front of huge blaring speakers trying to communicate to someone on the other end of their phone. Were they trying to impress their friends who couldn’t make it? Find someone they lost in the crowd? What was so important that you had to scream into a phone at the top of your lungs?

Trash anyone?
Then there’s the sea of plastic and paper that became our carpet at Dance Valley. What a waste of resources. I know these huge events generate tons of trash, and it’s hard to control the flow. But the attitude in Holland seems to be, just let it fall, and we’ll clean it up later for you. Just enjoy the party and don’t worry. Yeah, right. The mess at Sparnwoude gives Queen’s Day a run for it’s money. Oh wait, Queen’s Day is FREE! You paid dearly to get into Dance Valley, so you’d think the least they could do would be to provide some trash bins! Yeah there were a few small plastic ones, maybe a dozen. How about 30 or 40 of those huge metal bins strategically placed around, and big signs saying (in Dutch of course) “throw it here!”? Nope, let’s keep spoiling these kids, who in their naivete think it’s ok to throw their litter everywhere. Meanwhile you wade through ankle deep trash that recalls some dump on the outskirts of NYC. Not a pleasant sight, thank you.

Oh, Yummy!
Vendors were serving such “innovative fare” as hamburgers, ham and cheese sandwiches and of course lots of beer. I found that quite a contrast to the other alternative booths offering massage, alpha state sounds with flashing glasses, etc. Why not some alternative food and beverage choices??? Perhaps they tried these and found that the ravers aren’t into that type of food. Fine.

This scene is far different from the Roskilde and Lowlands festivals which attract similar if even larger crowds. First, the music in those places at least has some variety! And they both encourage the use of trash bins and have alternative food and drinks available. Does the Dance Valley management have no conscience?

The Long March!
Now about that long, long walk to the gate… why? The old entrance was right by the bus stop, why was it moved? Why make everyone walk around the entire venue, just to get in? This defies logic, and I’d sure like to find some reason that makes sense. And taxis were blocked several kilometers from there, forcing people to walk much further! 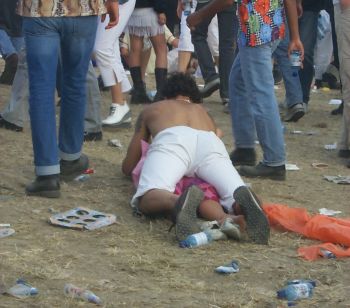 Love and Trash. Get it on!


Conclusion
The Dance Valley website says “Come and witness the future of dance music”. If this is it, it’s pretty sad. Yet most of the people there seemed to be having a great time on what turned out to be a beautiful day! In fact they were the best part of the show, as usual, in their colorful rave fashions. So who am I to complain? I must admit, I’m probably too old for this scene. Or too wise.

My advice is that if you want a crowded, uninspired, huge, overblown, overpriced party, Dance Valley is the place to be. If you’ve finally outgrown this scene, bravo to you! You’re ready to discover some new music, and there are plenty of other places to go to find it…