Krakow was the capital of Poland for centuries, long before Warsaw even came into existence. Krakow’s buildings survived World War Two virtually untouched, unlike poor Warsaw. Other atrocities were reserved for Krakow, but we are thankful the city remains as it was, a gem and a joy to visit.

Considered by most Poles as the Cradle of the Nation, Krakow (or Crakow) is on the banks of the River Vistula. The city was founded in 966, on a hill named Wavel above a large bend in the river. From this commanding view the royalty ruled Poland. 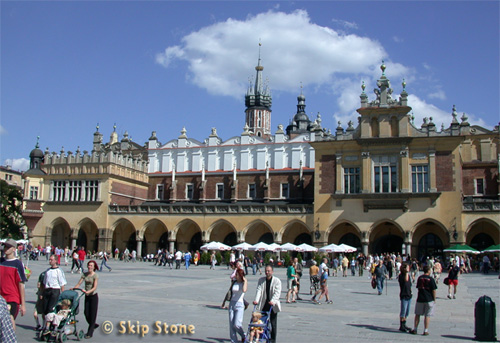 The major architectural wonders of Krakow besides the castle are in the Old Town at the foot of the castle. St. Mary’s Church and the Old Town’s Cloth Hall are in the middle of the town square.

In fact, walking around Krakow is remarkably easy, via the Planty Park. This ring of peace, vegetation and thousands of trees literally surrounds the Old Town of Krakow. This is where fortifications surrounding the city were begun in the 13th century, and it took almost two centuries to encircle the town with a 3km long chain of double defensive walls complete with 47 towers and 7 main entrance gates plus a wide moat. This was eventually destroyed by the ‘Republic of Krakow’ in the 1800’s, and the moat filled in. The ring-shaped Planty Park was created on the site. The city is bisected by the ‘Royal Way,’ the route followed by the coronation procession of the kings of Poland from the Church of St.Florian through to the Wawel and then on to the Paulite Church Na Skalce.

Walking around the Planty you can see remains of the old city gates, and you will pass the the Barbakan. Built about 1498 based on Arabic rather than European defensive architecture, it is a moated brick structure with an inner courtyard and seven turrets. Its 3-metre thick walls have 130 loopholes for archers to defend the gate from. 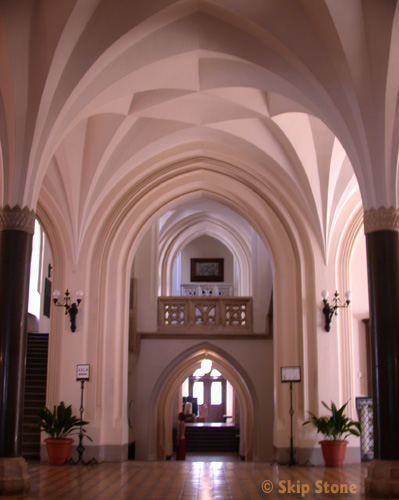 On this walk around the Planty Park, you will also pass the Krakow Academy or University, which was founded in 1364. This is where such luminaries as Copernicus and Pope John Paul II studied. There is a museum in the college, and the buildings are open to visitors. Be sure to check out the amazing ceilings in the Collegium Maius.

Krakow’s Rynek, or Town Square, is the largest mediaeval square in Poland and probably in all of Europe. Designed in 1257, it has remained intact to this day. As well as being the commercial hub of Krakow, the Rynek was the scene of many state occasions.

The Rynek is dominated by the great Cloth Hall (Sukiennice), which was built in the 14th century by Krakow’s famous and wealthy cloth merchants. Destroyed by fire in 1555, and rebuilt in Renaissance style by an Italian from Padua, so the Cloth Hall seems more Italian than Northern European, and is outstanding. The ground floor still functions as a market, albeit for tourists, filled with crafts and souvenirs and is ornamented by the coats of arms of Polish cities.

Nearby is the Town Hall Tower, or the Ratusz. This is all that remains of the 14th century town hall pulled down in the 1820s, but the view from the top is stupendous.

St Adalbert’s Church is in the southeastern corner. The oldest building in the square and the first church founded in Krakow, is named for a Slav Bishop. It’s basement houses a museum of history for the Rynek.

A little bit of a walk from the Old Town is the Jewish Quarter known as Kazimierz, with its empty buildings left undestroyed by the retreating Nazis. They did destroy almost every Jewish man, woman and child from here, leaving an empty shell full of ghosts. There were once 70,000 people here, now around 600 remain. But walking around here one is struck with the vibrance that once was the Kazimierz, and at every turn you have to wonder where everyone went.

Originally an independent town with its own charter and laws, Kazimierz was founded in 1335. Thanks to the granting of special privileges the town grew rapidly and soon had a town hall and market square almost as large as Krakow’s. In 1495, Krakow’s entire Jewish population was moved into the area (the population had grown rapidly in the 1330s when Kazimierz offered the Jews shelter from persecution in the rest of Europe); it became one of the great centres of European Jewery. Descriptions of Kazimierz in Polish art and literature suggest something special about the Oriental atmosphere of the place. Most of the residents were exterminated at nearby Auschwitz during World War Two.

In Kazimierz you will find Europe’s second-oldest Synagogue, and a graveyard complete with it’s own wailing wall made from the ancient headstones broken by the invading Nazis.

After the Nazis came the Soviets, and they did little to help Krakow or Poland after the war. The Soviets built a model factory town nearby, called Nowa Huta, and from 1949 the town’s smokestacks spewed thousands of tons of pollutants on the area.

The Polish have recently begun to clean up the traces of the Soviets, and most buildings have been remodeled and freshly painted. Krakow is a beautiful gem worth polishing, and a friendly city to visit.

Posted in Hip Guide to Poland