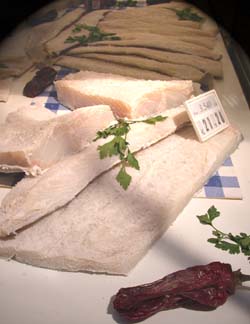 Salt fish bacalao on display in a Barcelona window…

Spanish food cannot be described in just a few words, it is as complex as Asian food, varied as all European fare put together, and reflects the diversity of Spain itself. As the popular saying goes: in the south of Spain they fry, in the central areas they roast, and in the north they make stew. But even this statement may prove to be too broad in it’s conclusions.

Traditionally, food in Spain was a mostly a reflection of the materials they had in the various areas. Remember that once upon a time refrigeration and easy shipments of fresh food hundreds and even thousands of miles from its source was impossible, thus you made do with what you had locally. In the past Spain enjoyed healthy peasant fare for the most part, stretching a hambone or a few scraps of chicken into a meal for the entire family out of basic necessity. It has only been since prosperity returned to the Spanish during the 1960s that they have been able to enjoy products and foods imported from around the world. 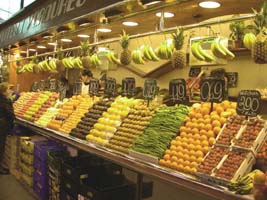 Fresh vegetables and fruit galore in the Barcelona market.

However, most people think Spanish food is spicy; I would have to disagree and call it savory. This isn’t Mexico, with blazing heat requiring a healthy dosing of hot peppers daily to cool you off. In fact most areas of Spain are rather mild in climate, except for the delightfully sunny coastal areas that Northern Europeans flock to by the millions during the summer.

Spaniards of the central regions enjoy roasted meats mainly because this is where they raise a lot of lamb and pork, and feed the animals lots of wild herbs, which gives the meats a distinctive flavour. Smoked hams are one of the major specialties of Spanish cuisine, you’ll see them hanging from hooks for sale in all the markets.

Beef is raised throughout Spain, but is notoriously tough, and the northerners prefer to make it into savory stews. One of the regional dishes is a “cocido” or stewed beef. This is invariably made with chickpeas, and stewed for a long time, to tenderize that tough old bull. Other vegetables in this “cocido” vary from region to region, and upon availability.

In the south they fry, mainly seafood. This can be anything from anchovies to squid. In fact, if it’s from the sea, the Spanish will eat it. Respect for the fruits of the sea is quite Spanish, and they prepare it not only fried, but in fabulous soups that warm the soul. One of the best meals I’ve ever had was in Marbella, with a freshly made fish chowder (Zarzuela de Pescado – or a comedy of fish) which included a liberal dollop of sherry; followed by a chicken roasted with about 40 cloves of garlic and simmering in a sea of olive oil. So in fact they do more than just fry in the south, but times are changing in modern Spain.

I have read accounts of Spanish attitudes towards socializing in the past, with only men found in the cafes and bars, while the women traditionally spent the majority of their time at home in almost Moorish seclusion. Times have changed fortunately, but the majority of the chefs you will see are men, and few women are to be found waiting tables.

As far as sweets and desserts are concerned, Spain is still under Moorish influence with the majority of cakes usually sickly sweet with marzipan and candied fruit as the main ingredients. The national desert is flan, which is nothing more than boiled custard covered with a syrup made of burnt sugar. The other popular offering is a churro, found everywhere on the streets in stands, and is just a fried piece of dough covered with sugar.

Perhaps the most recognizable and most Spanish thing to eat has to be Tapas. These little plates of food reflect the most creative Spanish cooking available. Anything from shrimps cooked in garlic, to croquettes with a béchamel sauce, to clams marinara, to “boquerones” (fried sardines) can be enjoyed as a snack. Snacking and drinking your way through the evening is incredibly Spanish, and can be lots of fun. Everyone says that grabbing a tapas and a drink at one place just leads to someone saying “lets go to that place down the street,” where they might offer a better shrimp than where you are at. So the evening will be spent hopping from bar to bar, with many different tapas consumed, and lots of drinks. Of course everyone you meet will have a “favorite” tapas place for you to try.

So be adventurous, ask around for the best Tapas Bar in town, and definitely sample some of the most savory and delicious food you may find in Southern Europe.