This business on the beach in Patong, Phuket was hit hard by Tsunami

On Decemeber 26, 2004 a large Tsunami hit the coasts of Thailand, Indonesia, Sri Lanka and India. The southwest coast of Thailand was hit hard. Hundreds of people lost their lives, with damage to business along the shore in the billions of dollars. The affected areas include the popular tourist destinations of Phuket, Krabi, outlying islands like Koh Phi Phi and Phang Nga, the province north of Phuket.

A huge international relief effort has helped the Thai people deal with the after effects of the Tsunami. Phuket and Krabi are already back in business, and work is ongoing on Ko Phi Phi to rebuild its tourist infrastructure. Volunteer divers from all over the world are helping to clean the reefs of debris around the affected areas and the restoration effort is already succeeding. 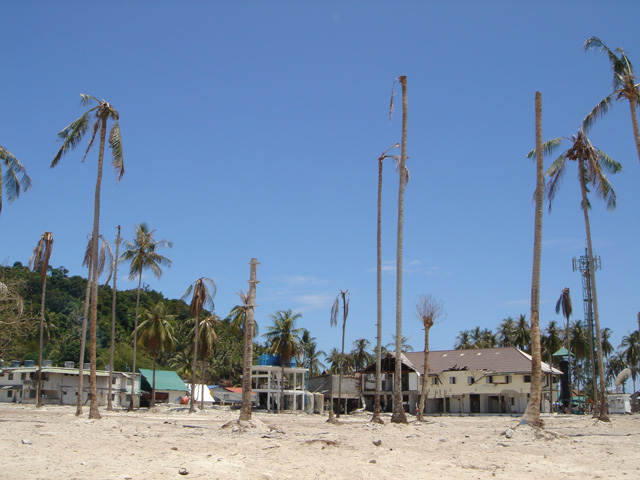 Phi Phi Don sustained major damage and will take awhile to recover, but you can still visit these spectacular islands.

If you visit these areas you may still see some spots where reconstruction is underway, but in most places the work is complete and it’s business as usual. So there is absolutely no reason to delay a trip to Thailand. In some places the Tsunami actually improved the beaches and offered an opportunity to redevelop the shoreline.

Scientists say the release of all that energy from the earthquake that caused the Tsunami means that another large quake along the same fault is unlikely to occur for hundreds of years, so you probably don’t need to worry about a repeat incident.

If you visit the Tsunami striken areas, you’ll be helping their economy recover. Many workers have been laid off, and those who are working complain their wages have been dramatically reduced due to the drop in tourism. Add to that, the fact that many workers lost family members and friends in the Tsunami and you can understand why the famous Thai smile is not so common in these places.

I was amazed to see how many tourists returned to the affected areas afterwards. They came back to bring aid, check on the status of Thai friends and to find closure, as the traumatic event left many foreigners and Thais in shock, unable to reconcile their abrupt escape with their lives, while so many died.

One man I met was a hero of sorts who was caught on Koh Phi Phi when the waves hit. He not only survived, but rescued others. He’d come back to find that closure and insisted that the tour boat we were on stop at Koh Phi Phi so he could go ashore and walk around. I guess he needed to see the aftermath to integrate the experience, and move forward in his life. You can read his account of the Tsunami online at scotsman.com.

Posted in Hip Guide to Thailand