The following being an account of my travels in Southeast Asia, Starting with my overly complicated and lengthy trip from Montreal to the Pacific island Phu Cuoq:

I have finally obtained my long-awaited state of cathartic release. I feel overjoyed as I realize this, sitting on the beach of an island on the south-eastern coast of Vietnam. The last 48 hours, in addition to the last 4160 hours spent in gruesome mind-numbing rehabilitation, have been torturous. Fortunately, all of this only added to the catharsis.

The last two days or so have been trying, to say the least. I first took an eight hour flight from Montreal to Munich. There was not much scenery up until I passed over England. Near the end, I passed over two nuclear power stations at 39000 feet and I must admit I was impressed. Just the sheer size of the silos and the mass of the steam can only hint at the power they represent, dwarfing all of their surroundings in comparison, even at such an altitude.

Next, for some reason, two fighter jets passed next to us, their relative speed amazing, displaying man’s strength and dominance, as if the twin nuclear power stations weren’t enough.

Upon landing in Munich, I was in awe of German efficiency, organization (and a little bit, of their arrogance) and the degree to which they dress better than Americans. After eight hours on a plane, I had to rock a serious urination and it was at this point that I made an interesting observation:

In the men’s room of Pierre Eliott Trudeau airport in Canada, they sell condoms, Tylenol and breath minds (and apparently only tampons in the women’s), whilst in the men’s room in Munich they sell condoms, assorted sex toys, vibrating cock ring and a disposable fleshlight-like device called the “travel pussy.” I think that says a lot about German society and what is beneath the overwhelming organization, orderliness and well-dressed repression. There is a built-up energy, a powerful and unrepressed kink. It is as if the Germans are hiding their fucked-up sex life behind organized efficiency,watches and Volkswagon ads.

Over the last few days, I have learned that a lot can be understood about a society based on its airport men’s rooms. They are a wonderful microcosm. In Thailand, for example, there are ads for knockoff everything starring at you from above their considerably less tidy urinals, while in Germany they have toilet seat sanitizer dispensers (with which I think I might’ve washed my hands in my sleep-deprived stupor) next to their singular, wall mounted toilets.

After the grueling eight hour flight to Munich was a quick transfer to Frankfurt, after which would be my journey to Thailand’s capitol, Bangkok, my most intense trial yet. It would be an awful ten hour test of faith, patience and ass cheek blood circulation.

From Munich to Frankfurt I was already only half lucid, nodding off and unsure as to wether I was awake or asleep. By midway through Frankfurt to Bangkok, in the back of a 747, the insomniac fear kicked in. I tried to watch shitty time-consumer but the spasms of my left butt cheek. The fear kicked in and I was in the delicate balance between five Euro coffee and airport red wine. The powerful sedation and stimulation duked it out in the arena of my mind. The prize was my consciousness and the red wine won. I awoke with painful cramps, ten thousand feet over Bangkok. This would be my second time in the city and I had ti fight through millions of unenthusiastic advertisements for their King’s birthday to get to my precious WI-fi. The immaculate monarch had saved the city from floods and drought at the same time and the word “auspicious” was used more than is ever necessary to describe someone’s birthday.

At this point I had been awake for far too long (bits of drowsy semi-unconsciousness on a cramped airplane do not count as true sleep) and I was just starting to get over the hump of brain-dead insomniac delirium.

With sleep deprivation, there is a certain point when your body ignores the fear and it kicks into its ultra-efficient mode. After a few painful ly conscious hours of miserable tiredness your body decides (or realizes) you’re in it for the long haul. and the less necessary areas of your central nervous system shut down. You no-longer digest food, you no longer speak any language other than your mother tongue and you no run on predetermined routine, on auto-pilot. You are not truly conscious, you are just a program lacking free-will solely designed to run itself at maximum efficiency, You will eventually run into problems and make mistakes when confronted with unexpected obstacles.

My mind was in this state when I reached Vietnam for my first time. The chaotic disorder of Saigon (Ho Chin Minh city, because communist leaders love to name things after themselves).

The nonexistent urban planning of Saigon was a stark contrast to the obsessive organization of Germany.

After this it was a short prop-plane flight to Pho Cuoq, on the coast of Vietnam. We flew over the quilt-like patchwork of Vietnamese rice agriculture and over the traffic jam of ramshackle fishing boats (which looked as if they were built solely of old scrap, with garage doors for bridges and the omnipresent corrugated aluminum for roofs).

Pho Cuoq is a , yet, undiscovered tourist destination, which will soon be ruined by plenty of us white folks, but, for now, it is a great example of the chaotic Vietnamese society.

Our cabi incessantly honked at the free-for-all of motor scooters and old ladies crossing the street at random, carrying chickens by their feet, and, eventually, we reached our destination: A small, run-down and beautiful resort. I was overtake by the perfectly temperate foliage and beauty of the somewhat unspoiled Pacific island.

We left the resort to look through the city (or city-like sprawl of corrugated aluminum). I got a painful straight-razor shave and I realized that I was in a city where virtually all possible medications were available over-the-counter from a shack where people barely spoke English for 20,000 or so (around a dollar. Vietnamese currency is in confusingly large denominations)

Fortunately. I resisted the temptation and I now sit here (honestly!0 enjoying my sobriety watching the Sun set beautifully over the horizon of the Southeastern Pacific Ocean. 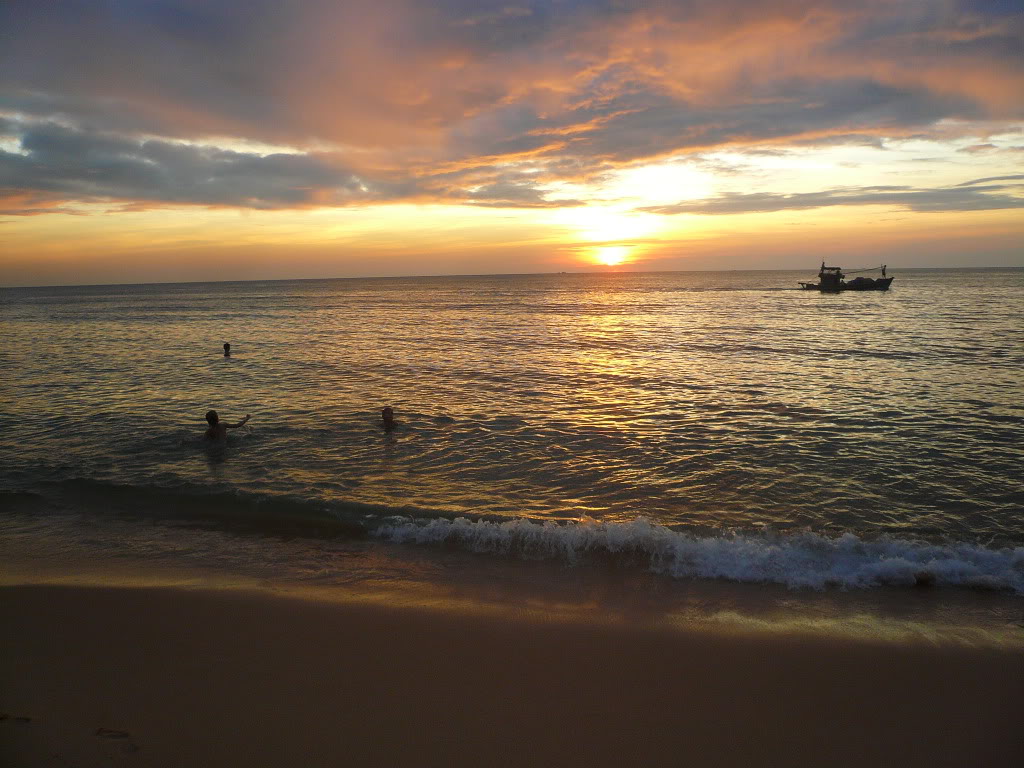 -Photos: interesting ones to add when i find my laptop foreign plug adapter