I woke up at around six hundred hours (Vietnam time, of course) this morning, still a little jet-lagged, but substantially refreshed. Still a little used to my old institutionalized self, I was surprised to find myself covered in mosquito nets, with all my belongings next to me in a big safe. I spent a few moments lying there in order to let my mind get a better grasp on its surroundings and reset my (Swiss-made) circadian clock.

I went outside and laid down on my hammock just as thew Sun was rising over the jungle palms. It was a breathtaking sight and it reminded me of an idea I’d had looking East on a November morning in Montreal.

I always wake up between fifty-three hundred and six-hundred hours on a regular weekday and the first thing I do every morning is lie in my bed getting my bearings on consciousness and violently arguing with myself, telling myself to wake up and go to school. Aside from all the insomniac misery, though, I noticed something beautiful. From around 5:30 to 6:00 every morning, there is a colour shift of the sky: as the Sun rises, there is a slight change in colour from minute to minute over that half hour period. It may be that the beauty can only be attributed to pollution and urban smog, but still it has a wonderful artistic quality to it.

In Montreal, over that half hour period in November, the sky shifts from grey-blue, to a salmon red, to an orange-blue, then to a slight purple, with hints of orange, which shift into aquamarine blue, and eventually to a november grey. I’ve noticed every time of year, every direction and every location have a slightly different variation of this colour shift: the order changes, the patterns change, the cloud-types and atmospheric pollution changes and even the sky’s colour palette changes.

I was thinking about this phenomenon and I realized the best idea would be to set up a camera on a tripod, looking East, programmed to photograph the sky once per minute over that half hour sunrise period every morning for a month. You would look at this colour shift and mix paints only to colours that match it and paint something. The composition wouldn’t matter. In fact, the farther from the theme of the colour shift’s origin, the better. I would paint an impressionist portrait of a continental breakfast and somehow it would subconsciously remind you of a November morning in Montreal. Even better, I could paint the beautiful view I see as I write this, of a temperate climate of palm trees, the beach and the Pacific coast, but with the colour shift of a January morning in Nunavut.

Here in vietnam, the shift is a yellow to bright orange shift, with red around the fringes, which slowly lightens back to yellow. The red portion grows in size and it is all mixed in with orange again until it slowly disperses into a perfect, untainted, cloudless blue. Non of the strange urban sky colours added by CFCs, just a pure Pacific sky blue. I would, I think, even venture to paint a winter scene of skiing on the mountain in Montreal with this colour shift, in order to further confuse the viewer’s subconscious.

Enough talk of customized colour wheels though. In my last entry, I said I was getting to a little weblog on the communiation, the currency and the seafood.

The communication difficulty is what I first noticed when I got here. An ex-french colony, people tend to have a few words of French, and a few words of English for economical reasons. With a complete language barrier, though, communication is rather simple. As I first left the airport (if you can call it that), I noticed our names misspelled on a sign, followed the cabi to the only van I could see (everyone else is on motor scooters), while he yelled in Vietnamese and furiously hand-gestured. He took us to our resort playing some sort of eastern imitation of my beloved psytrance. I wondered if he knew what the flangerized voices were saying. To the bump of the 140 bpm, there were samples of a woman talking about he she doesn’t like small penises and something about tweezers. It was all very bizzare.

We passed someone with around a tonne of bricks stradled over the back of his motor scooter, then another with enormous baskets of chickens on his. It is nice to get a view of the, as of yet, untainted culture. I can, however, see that tourism is coming. There are huge construction projects of big concrete blocks (with five stories of unsafe-looking bamboo and scrapwood scaffolding) next to row upon row of tiny corrugated aluminum shacks. They look very out of place.

There are few white folks and most people don’t speak English. When I do need to communicate or buy anything, we speak with a series of hand gestures and two or three mutual words. We point and talk, mutually incomprehensibly, in each-others languages, then we bargain by typing numbers (always omitting the last three zeros, of Vietnam’s extremely big numbered currency) into calculators and showing them to each other. I bought a very nice “Dolce & Nabana” (Knockoff seems to be the only brand) shirt at one such storefront-house-shack for 180,000 (or the equivalent of about (6USD) and I got a straight razor shave for around 20,000 (1USD). I had to point at certain areas of my stubble and make a thumbs-up gesture and point at my sideburns (which I always keep) and shake my head furiously. Eventually, though, everything worked out simply enough. The only true miscommunication was when I ordered a Coca-cola and got a Coca-nut.
from an island off the coast of Pho Cuoq: 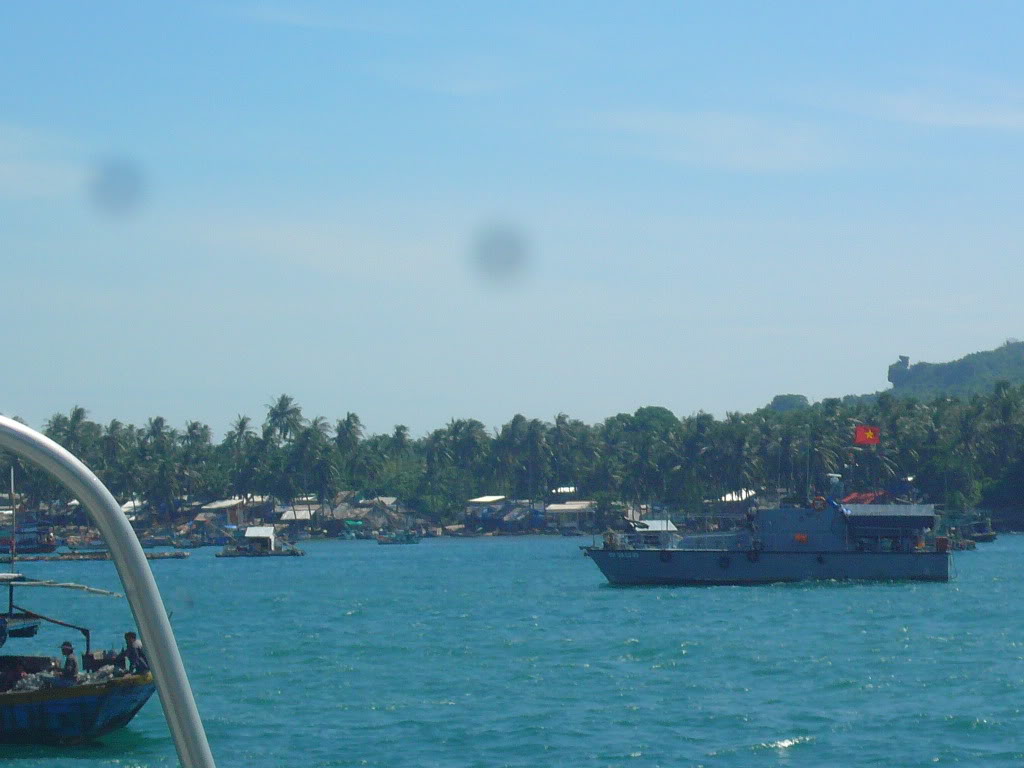 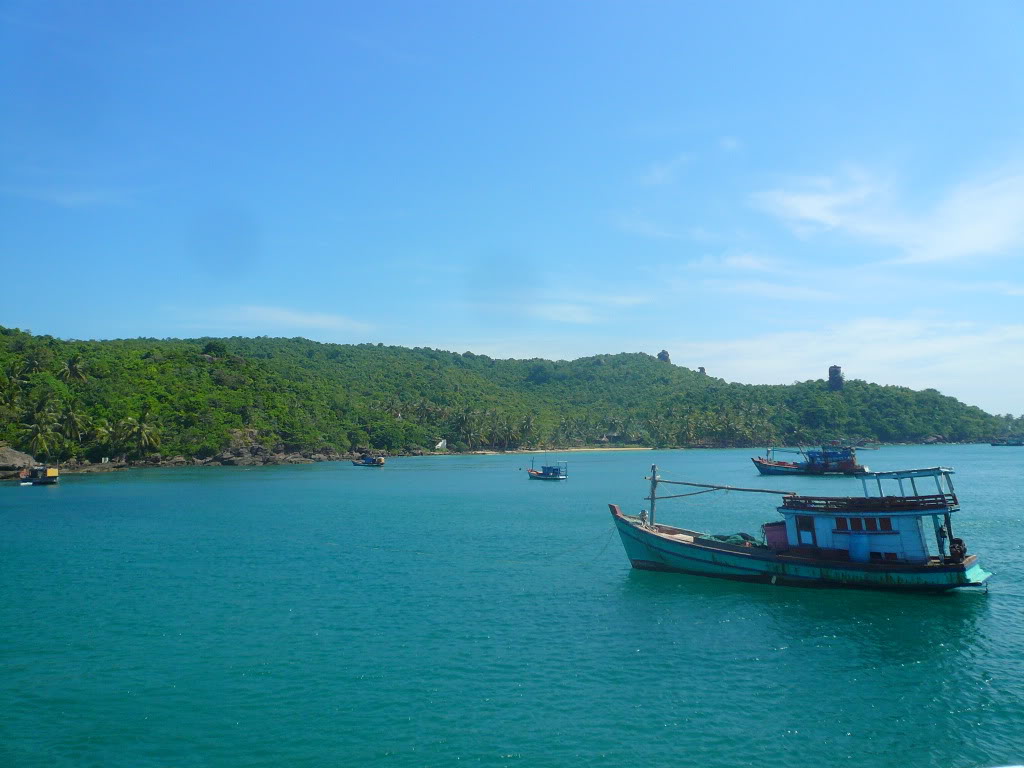