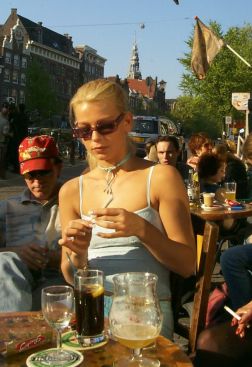 Coffeeshops are regulated by the government on a local level, which requires them to obtain a license and pay taxes. Currently, conferences are being held to decide if a regulatory system can be extended to the growing of cannabis for supplying the coffeeshops. While supply is an obvious necessity for the shops, the cultivation and supply of cannabis remains in a legal shadow, and is still being sporadically prosecuted. Despite the hazy status of growing, the acceptance of cannabis consumption has allowed coffeeshops to flourish with broad acceptance in Dutch society. Marijuana tourists and locals can hang out and toke up in pleasant surroundings with little concern for experiencing the most dangerous side effect of marijuana in most parts of the world: arrest or other legal hassles. For more about the Dutch attitude towards drugs, visit Amsterdam’s Drug Policypage. 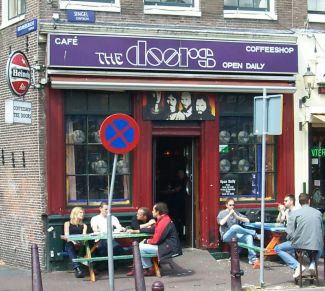 There are approximately 300 coffeeshops operating in Amsterdam, with about 1,000 total in the entire country of Holland. Coffeeshops may be located almost anywhere including residential areas, but outside of Amsterdam they can be more difficult to find. Some towns have decided NOT to have any coffeeshops and it is their right since they issue the license.

In any coffeeshop you can roll a joint, smoke a pipe or get blitzed from a bong. Most coffeeshops provide complimentary papers and filters or will loan you a pipe if you have none. Anyone can can sit and smoke in a coffeeshop without buying cannabis there. but as with most establishments, it is necessary to make a purchase, such as a drink or a snack like a tosti (grilled sandwich). Many shops will provide outside seating, and in agreeable weather, it can be an incredibly liberating experience to grab a table and get high outside, much to the amazement of straight tourists! Passing a bong on a crowded sidewalk has the definite flavor of freedom!

Since there are so many coffeeshops in Amsterdam, shopping for one that agrees with your taste can be half the fun. Nearly all coffeeshops echo some theme, be it a 60’s rock group or an exotic location. Shops vary greatly in the type of music they play, and the ambiance and amenities they offer, which range from a quite cozy environment of only a few tables to elaborate spaces on multiple floors which may offer couches, television, pool tables or internet access. The available food and beverages may also sway your opinion. Some coffeeshops serve coffee and pastries, while others may offer a full menu, prepare specialty items such as smoothies or organic treats, or serve alcoholic beverages. And of course the variety, quality and price of the marijuana and hashish will be key. Location may also be a deciding factor, if a coffeeshop is located close to your home base, or in a neighborhood you particularly enjoy. Most people tend to find a coffeeshop that suits their style, and frequent it regularly.

Tourists are attracted to the larger coffeeshops that advertise, but the locals tend hang out in their neighborhood coffeeshops where the prices are lower. Most Dutch people just pop in to buy some grass then go smoke elsewhere. Coffeeshops usually have a separate counter where they sell cannabis. To buy cannabis in a coffeeshop, just ask for their “menu”. It will list both hash and grass with prices. Prices vary according to quantity and quality. Typically it’s priced by the gram or you can buy 12 Euros (about $11) worth. The local Dutch weed is always the freshest and best quality.

Hashish is another story. The most reliable high quality will come from Morocco with several different grades to choose from. Black hash from Afghanistan, Nepal, India or Pakistan is available everywhere. Please read our warning about opium in black hash! You might also benefit by reading our stories about Coffeeshop Rip-offs.

For a real treat check out the Nederhash. It’s Dutch hashish made from their hydro or bio plants. As a rule of thumb; the lighter color the nederhash, the better. The current law limits the amount a person can buy to 5 grams of hash or grass, which is enough for anyone! Many coffeeshops also offer ‘space cake’ or some other pastry or chocolate dessert laced with marijuana or hashish. Beware! It’s better to get space cake “to go”, otherwise you might not go anywhere for a very long time!

The Dutch coffeeshop scene is not typical of Europe, although things are beginning to change in the European Union. Belgium and Portugal have now decriminalized cannabis and Germany may be next. Despite the “open” borders, laws and attitudes vary drastically from country to country. The Dutch have clearly demonstrated not only how good marijuana can be, but how it can become an integral part of an enlightened society! The Dutch coffeeshop scene is an excellent model for other countries to emulate someday, and for those seeking true freedom, to enjoy now.

Another warning. Theft is rampant in Amsterdam. Whether you’re in a coffeeshop, bar or restaurant, keep your bag or belongings very close, under your table, between your legs. Don’t leave anything unattended! Also beware of teams of thieves where one distracts you while the other takes your valuables! If something is stolen go to the police immediately. They won’t bother to act unless the crime just happened. Get witnesses too, otherwise it’s your word against theirs.

The Hip Travel Guide does not advocate the breaking of laws. Please use common sense and obey the local laws wherever you are!