Welcome to Barney’s Uptown, the biggest and best “smoker-friendly” bar and restaurant in the whole of Amsterdam!

If you’re looking for exceptional food, great value drinks and an exceptional service then you’re in the right place. Come and enjoy the massively varied menu in the comfort of our beautifully decorated building.

Once on the Nieuwmarkt, moved to the Warmoestraat.

I’ve been to Amsterdam twice in the last 3 years. Tried many coffeeshops around the city. This my favorite coffeeshop by far. Not because of the quality weed, but because of the nice people working there. The weed was good also, but not the absolute best in the city. It has a laid-back atmosphere with good music and great hot chocolate. Free use of the bongs, which they will clean right before you use it. Backgammon and chess games available. More of an upscale interior with nice woodwork and brass finishes. Located at the edge of the Red light district near the Nuiewmarket, I think. Guido Rocks!

I had a chance to pop in here during the Cannabis Cup. Usually when I spot a pool table in a coffeeshop, I turn around and head elsewhere, but at The Rookies, it’s more of an after thought, rather than the primary focus of activity.

I think The Rookies works because it’s got a more open feel than most narrow, cramped coffeeshops. You can sit most anywhere in the room and observe everything going on. I chose to sit by the pool table, which turned out to be unwise as I was getting a lot of ass in my face when they weren’t taking aim at it with the backend of a pool cue. Fortunately this was noticed by one of the staff who rushed over and moved around a few tables to create more room for those shooting pool.

I enjoyed the tunes playing on their superior sound system. A little Van Morrison and other upbeat music give the place a lot of character, and set the happy tone here. While it’s not exactly my cup of tea, lots of young people like this cheery place. 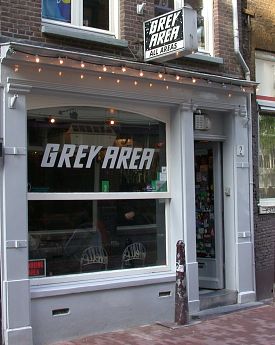 Small shop on a small street near the Spui. Good smoke.