Visit China with this interactive map! Double-click to zoom in or click and drag it around to move it. Plan your trip on your tablet or smart phone and carry this map around with you!

Are you planning to travel to China and you have any idea where in China you want to go? As you know, China is big! Traveling in China, I can tell you, there is so much to see and is breathtakingly beautiful.

There are some places I definitely suggest you, if nature interest you: The Yellow Mountains in Anhui Province…they are often depicted in traditional styled Chinese paintings. Places in off the beaten path provinces such as Hunan, Hubei (which has Wudang Shan, great mountain), that is not far from Henan Province where Song Shan is located and the Shaolin Temple.

If you have time to travel to Sichuan Province, or Qing Hai, the mountains there border on Tibet and are just as beautiful, Xinjiang Province that is close to Pakistan with all those mountains with fed lakes and rivers.

If archaeology interest you, get out to see the Tang Dynasty Mausoleum there 1/3 the size of the terracotta warriors in Xi’an. And for only 40 kuai you can rent a bike and ride around the city walls.

And if you stay in a place for a few days, I guess apartment rentals is a better choice cause are not so expensive as we think and are more comfortable. Just you have to pay a deposit on check in. The amount required will vary depending on the agency. But holes ask this too, so… The only inconvenient is the language barrier. Be sure that what you sign is really what you want (short term rentals is pretty new concept in China).

Ah, almost forget! I’m living in Beijing, so if this city that intrigues, inspire and rewards, this city who is reinventing itself day after day attract you, I can help! 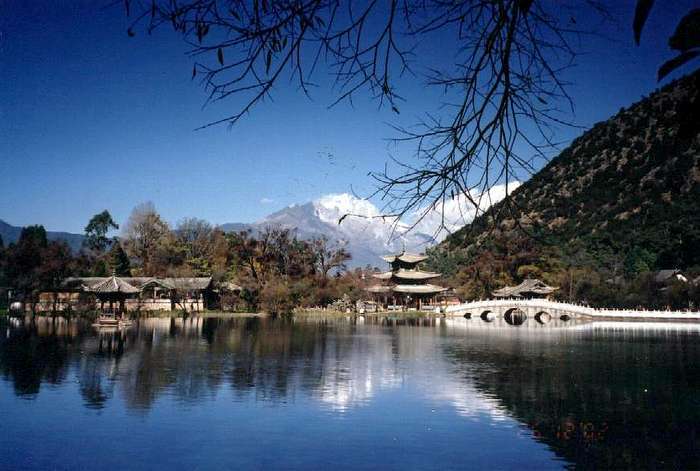 Fenghuang is the name of a small ancient town by the Tuojiang River. I remember the name because of Cui Cui, an innocent, kind-hearted girl in a novel by Shen Congwen, a renowned writer in China. It is in the town of Fenghuang that Cui Cui was born and grew up. I had long dreamed of visiting this town.

On a morning in early autumn, my dream came true. I had waited for this moment a long time; and perhaps because of this, I rushed into the small town as soon as I arrived. The Tuojiang River was covered in mist, and the houses on stilts rose out of the water. White fog shrouded the brown wooden pillars that supported these houses, making them look as if they were floating. A child’s cry came from an open window on the opposite side of the river. The cry was like a thin but firm thread, faint but persistent. 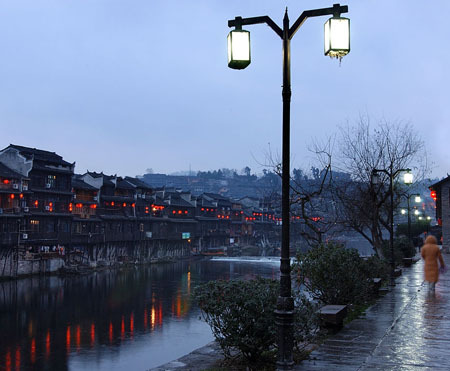 Alone, I aimlessly rambled through the lanes of the ancient town. The lanes seemed endless, curving round and round, forming an invisible but attractive swirl. As you walk around town, you can hardly feel the passage of time. Before you know it, time has softly and quietly glided past.

All these lanes radiate from the Rainbow Bridge located at the center of town. A typical covered bridge, the Rainbow Bridge has a bright-yellow body. Year after year, the Tuojiang River flows under the bridge as it transports visitors back to the last century, to Shen Congwen’s time. On both sides of the bridge there are houses built on stilts, special architectural structures particular to western Hunan Province. At dusk, sitting in the small teahouse on the Rainbow Bridge one can see these houses light up, one by one. 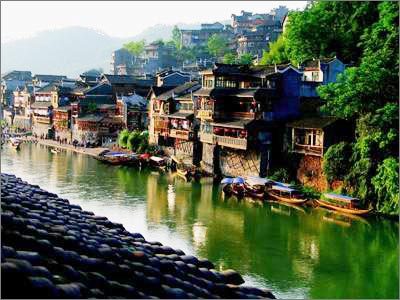 I walked among a stream of people composed of women carrying baskets on their backs, men leading a cow, photographers shouldering tripods, and porters looking for business. They were quite different from one another, but they walked toward the same direction and at the same pace. They even had the same expression on their faces.

In China the Internet is readily accessible. Internet cafes (网吧 wǎngbā) are abundant throughout China. Many of them are designed mainly for gaming though and are not useful places to do business. It is cheap (¥1 to ¥4 an hour) to use a computer, albeit one with Chinese software. Internet cafes are supposed to require users to show identification (passport), but this is generally not enforced. Traffic may be monitored.

It may be difficult to find an Internet-cafe with any service beyond simple access. If you need to use a printer or burn a CD, expect to search for the service, paying a fairly high price when and if you find it. The exception is tourist areas such as Yangshuo where these services are fairly readily available, though still at a price.

END_OF_DOCUMENT_TOKEN_TO_BE_REPLACED

The following emergency telephone numbers work in all areas of China:
Calling these from a cell phone is free.

The country dialing code for mainland China is 86. Within the country, the patterns for numbers are as follows:
Source: Wikipedia