One of the great pleasures of life is to dine well. In Prague this pleasure is considered to be part of life, not something reserved for special occasions. In fact few European capitals can claim a greater variety or more sophisticated cuisine than can be enjoyed in Prague’s hundreds of restaurants. And when you consider the low cost of dining out in Prague, you can understand why it’s so hip to visit this culinary mecca.

To start there is Czech cuisine, which like most central European food, is centered around meat and potatoes, with vegetables and excellent salads. Whether you like goulash or not, a meal in a traditional Czech restaurant is an unforgetable experience, if not a gastronomic high point. For that kind of experience you need only visit one of the many French restaurants dotting the city. From hardy French country food to Nouvelle cuisine, Prague does justice to the epicurian palate. World class restaurants serve up excellent fare, in elegant, classical surroundings. In many of these places you can easily imagine you’re in Old Europe with many restaurant buildings in the Old Town dating back 500 to 1000 years. So ambiance plays a big part in the Prague dining experience.

END_OF_DOCUMENT_TOKEN_TO_BE_REPLACED

West of Prague, near the German border lies several spa resort towns. The largest and most famous of these is Karlovy Vary, which has been serving the needs of health seekers since the Middle Ages. There are 12 hot springs in the area, and a huge resort complex to serve the needs of the millions of tourists (mostly German) who visit annually.

The history of the area goes back to the mid 1300s when Charles IV was impressed with the springs and the surrounding area. The springs pump out three million liters of water from 42 to 73 degrees Celsius. A variety of health restoring treatments are available including mud and peat baths. The water itself supposedly has rejuvenating effects, especially with digestive problems and metabolic disorders.

Franz Kafka was born in the Old Town Square in Prague in 1883. The son of German/Jewish/Czech parents, he wrote exclusively in German. He was a very influential writer, and his stories dealt with faceless bureaucracy and social alientation. His most famous works are The Trial and Metamophosis.

Kafka’s work wasn’t published until after his death, then the Nazis and Communists both banned his work. Yet his books managed to strike a chord with many writers who felt he’d broken new ground with his social commentary fiction.

This exhibition displays some of Kafka’s original works and photographs from the period. It’s worth a visit to pay homage to a man who influenced so many writers (this one included!). 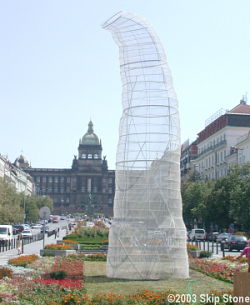 The National Museum lies at one end of Wenceslas Square. It’s the oldest museum in the country, founded in 1818. The museum’s exhibitions focus on the natural history of the region. These include mineralogy, paleontology, anthropology and zoology.