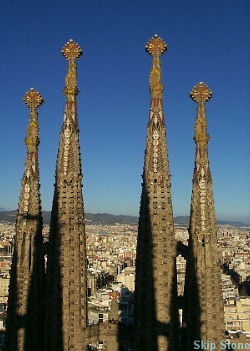 People will finally be able to worship in La Sagrada Familia, Antonio Gaudi’s beautiful church in Barcelona, after the Pope dedicates it this Sunday.  The church has been under construction for 128 years, and will require many more years before completion.

Lanzarote – the eastern most Canary Island – is home to some of the most unusual real estate on the planet. Thanks to a cataclysmic volcanic eruption – which lasted six years from 1730. Which covered one quarter of the island in solidified lava – so forcing a serious re-think about how to construct homes and houses.

This unique architectural approach is today best epitomized by the incredible home of the island born artist and architect Cesar Manrique – owner of what is undoubtedly the most famous and surreal property in Lanzarote.

Back in the 1960´s Manrique created a house within a series of five volcanic bubbles, which still blows visitors away to this day. This ingenious feat of architecture was Manrique´s first major piece of work on Lanzarote and encapsulates his organic approach and desire to create a perfect symbiosis between man, art and nature.

In the early 1960´s Manrique was studying art in New York and rubbing shoulders with the likes of Andy Warhol. But as tourism started to take off back on his native island he felt the urge to return. Afraid that his beloved Lanzarote could be buried beneath a sea of four star hotels and apartments. As had happened in other Spanish sun spots.

With the help of influential family friends such as Pepin Ramirez – then leader of the island government – he championed an ecological approach towards development. But he needed a flagship project to convince his skeptical fellow islanders. Many of whom doubted his assertions that Lanzarote could evolve as a viable tourist destination.

Manrique discovered his site by walking the lava fields that surround much of Tahiche. A small village, which is centrally located on Lanzarote. Here, the green tip of a fig tree caught his eye growing just above the sea of black volcanic rock. And on closer inspection he found that this emerged from one of five large bubbles that had been created within the flow.

Work commenced, the five underground chambers were interconnected, and by the end of 1968 Manrique´s creation was complete. Providing him with the perfect work and exhibition space and Lanzarote with a blueprint for future development.

Barcelona 2004 is a multi-cultural event planned for the whole world to attend and learn. The Universal Forum of Cultures is not only a conference, but a celebration of cultures and diversity from around the world. The event will run from May 9 to 26 September, 2004.

The press office has just released ambitious plans for the opening and closing ceremonies, you may read their official press release below:

END_OF_DOCUMENT_TOKEN_TO_BE_REPLACED

At the end of La Rambla, by the Barcelona harbor, you will find the Mirador de Colon, with a statue of Christopher Columbus on top.

Take a ride to the top in the elevator, and you’ll see Barcelona spread out under your feet. Glimpse the hustling, bustling modern city from a perch 60 meters above the harbor. Walk around the viewing gallery for a vista of not only the city and it’s major sights, but the mountains to the west, and the Mediterranean sea to the east.

END_OF_DOCUMENT_TOKEN_TO_BE_REPLACED

Barcelona’s Old Town grew around the features of La Rambla with it’s wide avenue leading to the sea, the Barri Gotic with its winding streets, La Ribera and it’s amazing mansions, and the Parc de la Ciutadella which features several huge, important museums of art and culture. 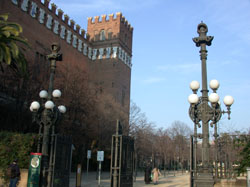 The Parc de la Ciutadella has a long and interesting history. Originally this was a fortress designed in the shape of a star, in 1715 by Prosper Verboom (possibly a Dutchman?) for then King Felipe V. The Citadel was built to be used by his forces against the Bourbon kings. Following an 18 month seige, the fortress fell, and eventually became a hated symbol of oppression for the local Catalunyans under the Napoleonic regime – as a prison.