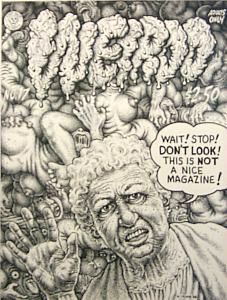 Eye Infection was easily the best exhibition I’ve seen at the Stedelijk Museum. As a longtime fan of R. Crumb and his wildly off the wall comics, characters and visuals, I happily devoured his original ink drawings on display at the museum. These included some of his earliest works as well as samples from his more popular creations, Fritz the Cat, Mr. Natural and Zap Comics. Crumb’s work seduces you with volumptuous vixens, then grosses you out with obscene visions of carnage and violence, then he manages to lay some obtruse social commentary on top of it all. The amazing thing is it works, and you keep coming back for more!

But the real suprise for me, and definitely the centerpiece of the exhibition is the collection of 40 works by Peter Saul. I wasn’t familiar with his art, which spans the 60s to the 90s, but thanks to the awesome display of such excellent canvases, I’m now a big fan. Saul gets his message across in dramatic style, whether commenting on American materialism, American imperialism, or just the human condition. His bright, colorful comic expressions hit you hard on many levels simultaneously. 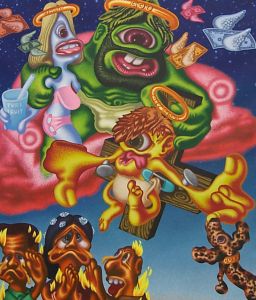 Some, like Saul’s version of the Mona Lisa are irreverent and zany, others like his anti-war paintings are vivid political statements. You can’t help but be moved by Saul’s work. And it seems the artist was gracious enough to include many of his best works from his private collection. A real joy to experience!

Another exhibit, Pay for your Pleasure by Mike Kelley contains 42 lifesize paintings and quotations of poets, philosophers and criminals. The quotes are not the famous ones you expect, but unusual descriptions of the creative or criminal mind. This traveling exhibit adds a self-portrait of a local criminal which then becomes part of the show when it moves on. The 56- year-old Dutchman Jan-Willem van E., who has spent 28 years in prison, was chosen to succeed the American serial-killer John Wayne Gacy.

The last two exhibits are works by Jim Nutt and H.C. Westerman with an American theme. These are fascinating in their own right, but somewhat overshadowed by the other works on display.

This exhibition was in the year 2002.